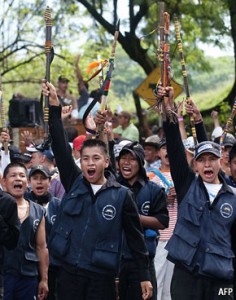 They say that a picture is worth a thousand words. The latest edition of the prestigious British magazine, the Economist (March 2, 2013, p. 38) proved this saying. It devotes 500 words to the most recent bout of labor conflict in the country’s coal and coffee industries, but says nothing about the image published to decorate the piece, one of the most striking pictures of the coffee strike. The silent photo shows five young kapur warrara or children of the ant, as the members of Karmata Rua’s indigenous civic guard from Jardín (Antioquia) call themselves. This community in Colombia’s north-western Andes largely lives from producing one of the world’s best drinks, organic coffee from Colombia. So who are the kapur warrara and what are they doing in the strike?

They are an example of indigenous governance and solidarity with different popular sectors of Colombian society, in this case the more than 500,000 families of peasant coffee producers who bring you “the finest coffee in the world.” The Embera Chamí community and government of Karmata Rua who mobilized unanimously in support of the strike, is also celebrating thirty years of resistance. In 1980, they organized peaceful takeovers of adjacent coffee haciendas to recover part of their ancestral territories, reconstruct their economies and resist violence. In doing so, they slowly consolidated socio-economic, justice and environmental governance institutions that have resulted in innovative leadership, territorial expansion, and insertion into local markets.  Three decades of organization has given them back the dignity of governing a small part of their ancestor’s territory, with their own laws and authorities. They’ve also survived marginalization and violence.

The recovery of their ancestral territories has allowed them to explore economic alternatives and protect their natural resources, in this case water and forests. So why are they now complaining, and sending their children, the children of the Ant to participate in the strike? Because current market conditions for coffee grain promise to ruin their economy and incidentally, their territory.

According to Aquileo Yagarí, a leader from Karmata Rua, the small coffee farmer invests $570,000 pesos (316 US$) to produce a load of 125 kilos of coffee. In late 2011 this load sold at $ 1’050,000 pesos ($583) and today they are getting $490,000 ($272). He also adds that input prices are also on the rise. So, as the protestors say, “do you need a calculator?” Coffee producers are thus facing a situation in which production costs are higher than the market price of the grain. So the kapur warrara along with fellow farmers, are seeking an economic future tied to the product that historically generated so much economic benefit for Colombia, coffee. They have five demands, which the national indigenous movement also supports, these include 4 economic points: (1) A remunerative price for coffee, (2) Control of the price of fertilizers, (3) Debt exoneration, and (4) Stopping the importation of coffee. There is a fifth demand that has to do with the territoriality of the coffee growing states: (5) No to mining in coffee territory.

In the same way that the indigenous movement of the 1970s, the coffee protestors are looking for an economic future in the territory that sustains one of Colombia’s most entrenched cultures, that of the small farmer in his land, a culture to which many Andean indigenous communities are now connected. This culture is now an alternative to extraction, resource-intensive development, and large-scale mining, which are all uprooting people from their land. If we end with small coffee producers to favor an economic model based on extraction we will end with a big part of Colombian culture, one based in the small owner and producer of the country’s main  historic export , on the backs of which we built what little government and democracy Colombia has (Molano, 2013). In this sense it is deplorable to see the role of the National Federation of Coffee Growers (e.g. the guys who came up with the Juan Valdez symbol) who went from being a true representative of the coffee economy and the interests of all coffee producers, to become a club of speculators who are discrediting this popular uprising. For this reason, the strike is demanding that the Federation be reformed “facing the farmer.”

The strike then, represents a struggle for the economy of a country and a culture built on a especial economic and political model, that of the small, democratic and hardworking Colombian small coffee producer. This small coffee producer also has an Indian face. For this reason, the Embera Chami of Karmata Rua support the strike with their authorities seeing it as a civic duty. These young kapur warrara are organizing logistics on the ground, and keeping the blockade with discipline and solidarity. They let ambulances through and every 2 to 3 hours, also vehicular traffic. These actions are risking the lives of these young people who carry the legacy of their elders in the faces pictured. They display the achievement of the indigenous movement in this region of Antioquia, and the work and mandate of their elders. In an obvious gesture of pride, they raise their command batons, Colombia’s symbol of resistance and indigenous authority, and most likely receive acceptance from their peasant peers. Thus, a community that saved herself with little support except for the solidarity of a few friends in other parts of Antioquia and Colombia, now helps lead the dangerous task of maintaining a blockade, making themselves visible in the eyes of the security forces repressing the strike.

This photo, this brief moment in the life of the country, or of Bolombolo, Antioquia where it was captured, is the cry of the Colombian people telling the national government to support a living wage and respect the territories of agriculture and water, the territories that built the country and sustained its democracy, and that now hold the bravest, most persistent and determined people of Colombia, people like the kapur warrara, the children of the Ant and everything they represent.

We in Jenzera are extremely proud to count the people and leaders of Karmata Rua amongst our closest allies, teachers and mentors. Our hearts and minds are with you in this fair struggle.